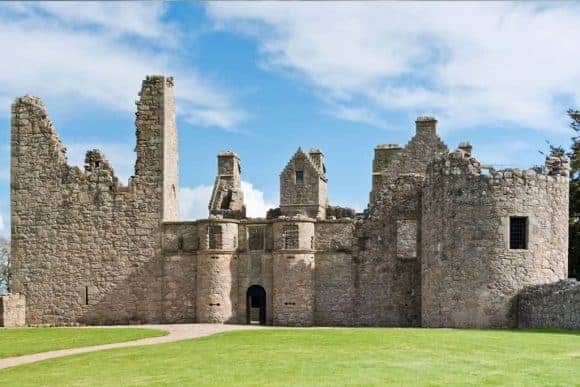 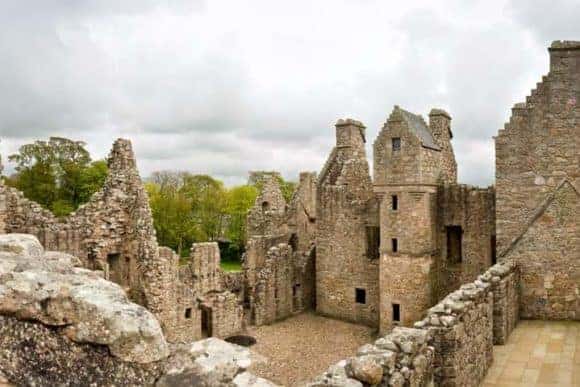 See for yourself why Tolquhon Castle has been described as one of the most beautiful castles in Scotland.

The oldest part is a tower house of the early 1400s. The Lands of Tolquhon came into the possession of Sir John Forbes in 1420, and it is likely that he built the tower house. An armorial panel displaying his arms was found amongst the rubble of the tower.

The tower is known as Preston’s Tower: Sir John’s wife was Marjorie Preston, heiress of Sir Simon Preston, Lord of Formatine. The castle is first recorded in 1536, as “a tower and a fortalice” – the fortalice probably refers to service buildings around the tower.

It was Sir William Forbes, 7th Lord of Tolquhon, who built the castle we see today. He began a major building programme in 1584. When work was completed in 1589, Tolquhon made a fine residence for Sir William and his spouse, Elizabeth.

A stone plaque by the front entrance records:

Sir William’s castle
Architect Thomas Leiper adopted the idea of a rectangular, three-storey residential block, with other ranges of buildings grouped around a central courtyard. This was instead of the traditional tower house design favoured by his predecessors.

The galleries (indoor recreation spaces) on the first floor of the west and north ranges – and accessible from the family’s private apartment in the south block – were an innovation. Beyond the courtyard, Sir William added a formal garden and large walled pleasance (pleasure ground).

The castle’s lavish decorations include carved human figures on the twin-towered gatehouse, two of which are likely Sir William and Lady Elizabeth.

A house for the dead
Sir William also had an ornate memorial for himself and his wife built in the parish church in nearby Tarves village.